What is the difference between magnetic attraction and magnetic induction coating thickness gauge ?

What is the difference between magnetic attraction and magnetic induction coating thickness gauge ?

In the market, both magnetic attraction and magnetic induction coating thickness gauges are almost uniformly referred to as magnetic effects, but from a rigorous point of view, there are still differences between the two. 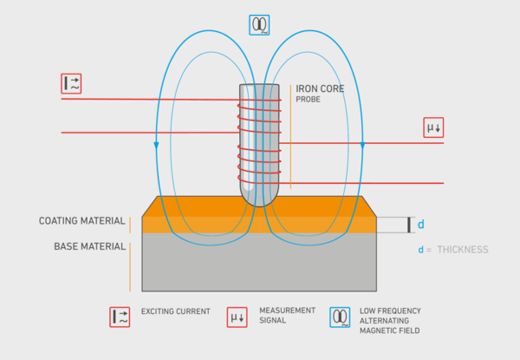 The suction force between the permanent magnet (probe) and the magnetically conductive steel is proportional to the distance between the two, and this distance is the thickness of the coating. Using this principle to make a thickness gauge, as long as the difference between the permeability of the coating and the substrate is large enough, it can be measured. In view of the fact that most industrial products are stamped and formed by structural steel and hot-rolled and cold-rolled steel plates, magnetic thickness gauges are the most widely used. The basic structure of the thickness gauge is composed of magnetic steel, relay spring, ruler and self-stop mechanism. After the magnetic steel is attracted to the measured object, the measuring spring is gradually elongated and the tensile force gradually increases. When the pull force is just greater than the suction force, the thickness of the coating can be obtained by recording the pull force at the moment the magnet is separated. New products can automatically complete this recording process. Different models have different ranges and applicable occasions.

This instrument is characterized by simple operation, no need for diplomatic power supply, no need for calibration before measurement, and low price. It is very suitable for on-site quality control in the workshop.

The representative instruments of the industry include: Nix Coating Thickness Gauge 4500. During the course of use, we will find that the instrument does not have a probe design. When measuring, the value can be displayed as long as the coating is touched lightly. Determine whether the magnetic coating thickness gauge uses magnetic attraction, whether there is a probe during the observation period, or use the product description to protect the probe with materials such as ruby or sapphire. Because the contact surface is large and wear is large, stronger protective materials are needed.

When the principle of magnetic induction is used, the thickness of the coating is measured by the size of the magnetic flux flowing from the probe through the non-ferromagnetic coating into the ferromagnetic substrate. The size of the corresponding magnetoresistance can also be measured to indicate the thickness of the coating. The thicker the coating, the greater the magnetic resistance and the smaller the magnetic flux. The thickness gauge using the principle of magnetic induction, in principle, can have the thickness of the non-magnetic coating on the magnetic substrate. Generally, the permeability of the substrate is required to be above 500. If the coating material is also magnetic, the difference between the permeability and the base material is required to be large enough (such as nickel plating on steel). When the probe with the coil on the soft core is placed on the sample under test, the instrument automatically outputs the test current or test signal. Earlier products used a pointer meter to measure the magnitude of the induced electromotive force. The instrument amplifies the signal and then indicates the thickness of the coating. In recent years, the circuit design has introduced new technologies such as frequency stabilization, phase lock, and temperature compensation, and used magnetoresistance to modulate the measurement signal. It also uses a patented integrated circuit and the introduction of a microcomputer, which greatly improves the measurement accuracy and reproducibility (almost up to an order of magnitude). Modern magnetic induction thickness gauges have a resolution of 0.1um, an allowable error of 1%, and a measuring range of 10mm. 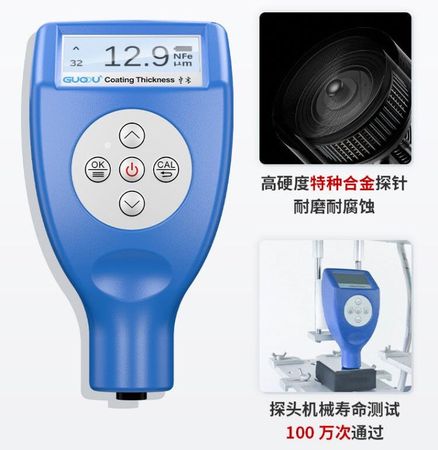